Join us for a special virtual conversation with Cyril Dion, one of the leading figures advocating for climate change action in France today, and Luc Hardy, a French-American explorer, environmental advocate, and Arctic specialist.

Dion co-directed the Cesar-award winning documentary Tomorrow, and, in 2019, was appointed by President Emmanuel Macron to help oversee the Citizens’ Convention for Ecological Transition.

Hardy founded Pax Arctica and has spent the last two decades advocating for climate change awareness through his award-winning film and photography projects, public advocacy and expedition leadership, and prolific writing. Hardy has produced several documentaries including The Pursuit of Endurance (2015) and Arktika Incognita (2018), as well as the forthcoming fiction/documentary The Seacrets (2020).

These artist-activists will discuss how the COVID-19 pandemic is reshaping environmental practices in agriculture, economy, and governance. Maintaining an optimistic outlook towards curbing climate change, they will identify concrete solutions to the challenges of the 21st century.

“Without question, this is absolutely the best and most creative film on the future of humanity and the environment”. — Paul Hawken

Stream it before the talk at: Amazon / Google Play / iTunes / YouTube

Learn more about Hardy’s activism and artwork at paxarctica.org. 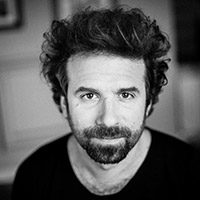 Cyril Dion is an actor, director, writer, and environmental activist, who founded the ecological movement Colibris (French for hummingbird) in 2007.