Johanny Bert and Magali Mougel, the team behind the acclaimed play She No Princess, He No Hero, reunite to bring their new work, Shivers, to U.S. audiences.

This digital adaptation of their play Frissons, which premiered to wide praise this past winter in France, has been animated and translated to English for young American audiences. The creative process of Charlotte Melly‘s drawing beautiful illustrations is captured by the camera. This allows Bert to combine storytelling and soundscape to follow a young boy as he struggles to welcome his younger brother into his life.

Anis is about to become an older brother and worries about sharing his room, his toys, and his parents’ love with his new sibling. Shivers plunges young spectators into Anis’s world, as he anxiously meets his adoptive brother to forming a friendship through mutual discoveries and overcoming fears of one and other.

Shivers and its French version Frissons is available to stream for free October 10–17. Johanny Bert is a French actor, director, and puppeteer. 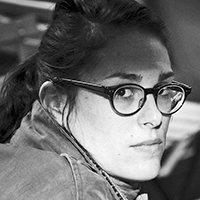 Magali Mougel is a playwright and drama teacher. Charlotte Melly is a French graphic designer and illustrator. Laura Cappelle is an arts writer and sociologist who lives in France.

Free & open to all


Please consider making a tax-deductible donation to FIAF. Your gift makes programs like these possible and sustains FIAF during these unprecedented times. Another great way to support FIAF is to join FIAF as a member!

This video was adapted from Frissons, a show created as part of Odyssées 2020, a festival developed by Théâtre de Sartrouville et des Yvelines–CDN in partnership with the Yvelines Departmental Council.